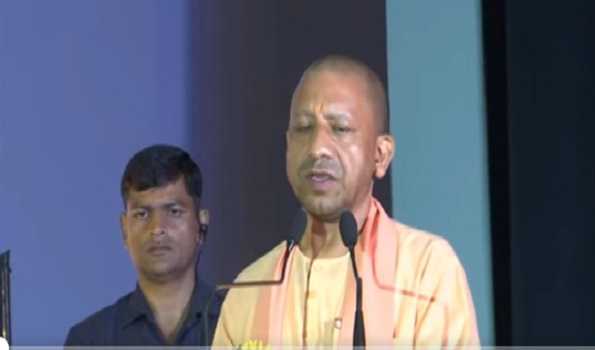 Lucknow: Chief Minister Yogi Adityanath on Saturday said the Indian culture and wisdom have never allowed any obstacle to come in the way of adopting knowledge and its expansion.
Addressing the fifth national convention of Vigyan Bharati, Yogi, while citing a shloka said, “In Indian culture, it is said that from wherever knowledge comes, keep your eyes open for it. This reflects that Indian vision is scientific in itself.”
He inaugurated an exhibition on the occasion and also released the Hindi and Marathi editions of ‘Freedom Struggle and Scie

nce. A souvenir of the fifth convention of the Vigyan Bharati was also launched on the occasion by Adityanath.
The Chief Minister said he was very happy to attend the fifth convention of Vigyan Bharti, which has been working continuously for almost three decades to take forward the tradition of indigenous knowledge and science in Uttar Pradesh, the heartland of Indian culture and tradition.
He said the Indian vision considered any new knowledge as science. “Vigyan Bharati has the patronage of Rashtriya Swayamsevak Sangh (RSS). The thinking and vision of the Sangh is scientific and from this point of view, it works in the national interest.
“Founder of RSS Hedgewar was a doctor and a scientist himself. Sarsanghchalak Guruji was also a scientist. All the other Sarsanghchalak of the RSS have also been inclined scientifically,” added the Chief Minister.
He said, “The Indian vision says that nothing gets destroyed, only its form changes. It always remains in totality. This is the scientific point of view. This has been presented through the prayer of Vigyan Bharati.
“In our normal customs, we decide auspicious works according to the Panchang system based on Vikram Samvat. There is a difference between the dates of the English calendar and Vikram Samvat. There is no scientific vision in the English calendar, whereas Vikram Samvat has scientific vision.
“There is no concept of muhurta in English calendar. In English calendar, dates of solar eclipse and lunar eclipse change every year, whereas according to Indian Panchang, solar eclipse occurs on Poornima (full moon night) and Amavasya (new moon night). This had been told by our sages long back,” he added.
The Chief Minister said Indian scientist Jagdish Chandra Basu gave this vision that every animal and plant has compassion. “Maharishi Kanad talked about the atom through his Vaisheshik philosophy. Today, the God Particle is being discussed. Indian sages talked about the impermanence of the soul in this regard.”
He said in Mahabharata, as part of teachings in Gita, Lord Krishna told Arjuna about the soul that it will remain in every era, country and situation.
“Fire cannot burn it, no one can kill it, no one can cut it. It only transforms, then why are you afraid of dying? Today, the world is doing research on this. Our philosophies and scriptures have already been explained extensively long back. The messages of Shri Bhagwat Gita are still relevant and important, despite being 5,000-years-old.
“We have lagged behind in the field of knowledge and science because we accepted our knowledge from a religious point of view, but did not make an effort to adopt its practical form. We should develop a habit of writing and noting about incidents taking place around us. The institutions should be encouraged for data collection, added the Chief Minister. (UNI)
#Yogi, #Scientific, #Panchang
You might also like

Motto for Today: ‘What a leader does has far greater impact than what he…

Motto for Today: ‘Time does not change things;…

Motto for Today: ‘There are plenty of obstacles in…

Motto for Today: ‘Leadership requires belief in the…

Motto for Today: ‘What a leader does has far greater impact than what he says.’

CWG medalist hits out at AAP govt on lack of support