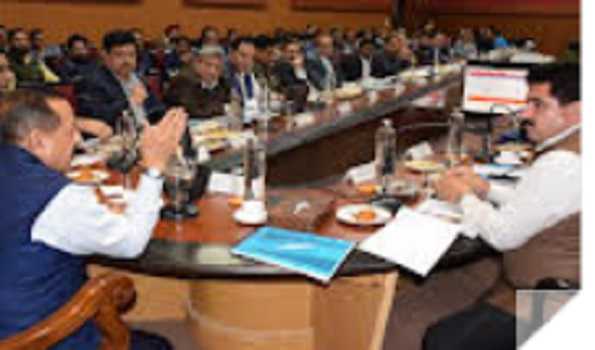 Jammu: Union Minister Dr Jitendra Singh on Saturday stressed the synergy between public representatives and the administration while taking up the projects for execution.
Chairing the District Development Coordination and Monitoring Committee (DISHA) meeting to review progress of various Centrally Sponsored Schemes (CSS) being implemented in Doda district, Dr Singh said better coordination between these representatives and the district administration is key to schemes being implemented on ground.
At the outset, District Development Commissioner Doda, Vishesh Paul Mahajan delivered a presentation on the achievements and progress recorded under different Centrally Sponsored Schemes and presented an overview of various major projects being executed by different departments and agencies in the district.
Deputy Commissioner gave the status of physical and financial progress scheme-wise being executed under various CSSs.
While reviewing cultivation of lavender in the district, Dr Singh said that as the farmers are taking up lavender cultivation on commercial scale for being a profitable farming, Doda district would be branded as a role model in the country in lavender farming.
Detailed presentation was given on various CSS schemes being implemented in different sectors in the district wherein financial as well as physical progress of mega projects which include widening of NH-244, GMC Doda, and other major projects, High Altitude Medicinal Plant Bhaderwah under AYUSH, besides achievements in Back to Village program, R&B, JJM, PMGSY, Power, MGNREGA, PMAY-Urban, SBM-Grameen, Mission Youth’s Mumkin Scheme & Tejeswani, Amrit Sarovar, beneficiary oriented schemes, Ayushman Bharat Abhiyan-SEHAT, RBSK, PMBJAK, other social security scheme (Pension/scholarship), employment generation schemes etc.
The minister took detailed review of all these schemes undertaken by different departments in the district wherein he enquired about the status of each scheme.
He said that it is the endeavor of Prime Minister Narendra Modi to trickle down the benefits of all the centrally sponsored schemes to the deserved lot and to the last person in the queue while urging all the concerned to work in close coordination for better results at the grass root level.
He also directed the concerned officers to remain in touch with the public representatives whenever they visit their area and make people aware of the benefits of these schemes.
On the occasion, public representatives flagged various issues before the minister who issued directions to the concerned for early redressal.
Dr Singh also directed the concerned departments to work with renewed zeal and dedication for effective implementation of all schemes and coverage of 100 percent eligible beneficiaries under all schemes.
On the occasion, Dr Singh also complimented the Doda Administration for implementing various CSSs successfully in the district and achieving over 90 percent saturation in various schemes.
The meeting was attended by Secretary Tribal Affairs J&K, Chairperson District Development Council Doda, Deputy Commissioner Doda, Chairperson Block Development Council, Chief Planning Officer, SSP Doda, Principal GMC Doda, Additional District Development Commissioner Doda, senior officers from line departments and other concerned. (UNI)