Shilai stands at No. 2 with 77 percent poliing 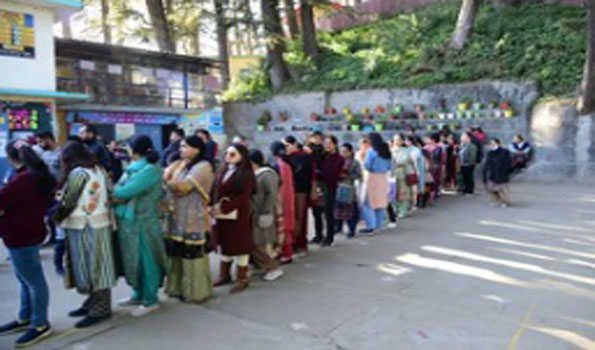 Shimla: Himachal Pradesh recorded heavy turnout in Assembly elections. The world’s highest polling station at a height of 15,256 feet above sea level recorded 100 pet cent polling. Spokesman of Election Commission said that highest 77 pc was recorded at Shilai followed by Pachhad and Renuka 76 pc and Doon in Solan 75 pc.
Till 5 pm, a total of 66 pc polling was recorded. However, in many polling stations voters were waiting their turns after 5 pm on the conclusion of voting.
Around two lakh postal ballet and Services voters have already given their mandate. India’s first voter Shyam Saran Negi died on November 5 at age of 106 years after casting his Postal ballot on November 2.
Election Commission of India provided service of Postal ballot to Negi and around two lakh centenarians, and many others who are in 80s and 90s, at their door steps. Daliya Ram (105 years) resident of village Bagetu, polling booth Basha, Solan Assembly Constituency castes his vote today. In Shimla district total 70.19 pc Polling recorded including 77.90 pc in Jubbal Kotkhai, Theog 74 pc , Rampur 72.57 pc, Rohru 70.26 pc, Chopal 70.12 Theog 74.0, Kusumpati 67.9, Shimla rural 66.35 pc and Shimla urban 62.42 pc. In Kangra district 63.95 pc. Kangra recorded 71 pc and Dehra 70 pc, Jaswan Pragpur 68 pc and Indora 67 pc, Dehra and Jawalamukhi 66.50 pc Polling.
In the world’s highest polling station Tashigang recorded 100 pet cent polling as all 52 Electorate cast their votes here. Polling was continued in Kaza Subdivision of Lahaul-Spiti district as 78 pc Polling was already recorded till 5 pm. Four new voters voted for the first time. Free breakfast and lunch for all voters. All the voters came in traditional costumes. Voting on Saturday at Tashigang. ADC Kaza Abhishek Verma visited the polling station. He was honored by wearing traditional dress. And also congratulated all the voters on this occasion. The ideal polling station was decorated in a traditional way, a creche was made for small children, a counter was made to help the voters and a waiting room was made. Giving information, Deputy District Election Officer Abhishek Verma said that the voters come from Tashigang and Gete villages, all these voters were made aware by the BLO to go door-to-door to vote. Last time there were 48 voters here. Free breakfast and lunch were arranged by Mahila Mandal for all the voters. The oldest voter at this polling station was 78-year-old Sonam Dolma. She said that she has been voting continuously. And the young Tashigang Lobzang Todan, who voted for the first time, said that he is a Lama and lives in Kieh Buddhist Monastery. Today was a holiday and I had been waiting for a long time to cast my vote. First voter Tenzin Nodon, a resident of Ta Shigang village, said that I study in RKMV Shimla, this is the first time I have got the opportunity to vote, so I have come here from Shimla. I urge everyone to always vote. First time voter Tenzin Yodon said that he has come to Tashigang from Dharamshala to cast his special vote. Voting is a must in a democracy. Kunjok  Chhodan said that today I am happier that I have voted in the world’s highest polling booth. We will vote only then we will be able to choose a good public representative for ourselves.

Himachal has developed as a leading state of the country: Anurag Thakur