New Delhi: ‘Dr Mashoor Gulati’ returns to Sony TV. They say that an apple a day keeps the doctor away but do not keep this doctor at bay.
This Sunday, Sunil Grover aka Dr Mashoor Gulati will be making an appearance as the ‘Comedy Ke Sarpanch’ on India’s Laughter Champion (ILC). 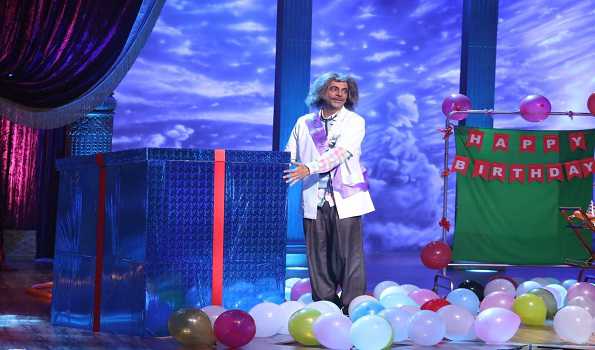 Returning to the world of television after a year’s hiatus, the comedian-actor will be seen in his favorite avatar of Dr Mashoor Gulati.
While the contestants impress ‘doctor saab’ with varied stand-up acts, it be a surprise to everyone when Dr Gulati decides to celebrate his own birthday in a humorous turn of events.
With a man declaring that Dr Gulati would like to celebrate his birthday, to setting the scene with balloons scattered all around to people dressed as nurses dancing around him, Dr Gulati will be seen singing a special birthday song sung by none other than, himself.
Making everyone convulse with laughter, Dr Gulati will amuse the audience with his hilarious but heartwarming antics, celebrating the birthday of the comedian’s one of most popular character, which incidentally falls just four days before Sunil Grover’s actual birthday on August 3.
After giving everyone treats around the set, the celebrations would conclude with the nurses smearing cake all over Dr Gulati.
Both the judges Archana Puran Singh and Shekhar Suman will be mighty regaled with the whole act followed by contestants Vignesh Pande, Jayvijay Sachan, Hemant Pandey, and Radeshyam Bharti who are nothing but entertained by their sarpanch.
Watch “India’s Laughter Champion” on Sunday at 9.30 pm on Sony. (UNI)

Motto for Today: ‘Time does not change things;…

Motto for Today: ‘There are plenty of obstacles in…

Motto for Today: ‘Leadership requires belief in the…

Motto for Today: ‘What a leader does has far greater impact than what he says.’

CWG medalist hits out at AAP govt on lack of support