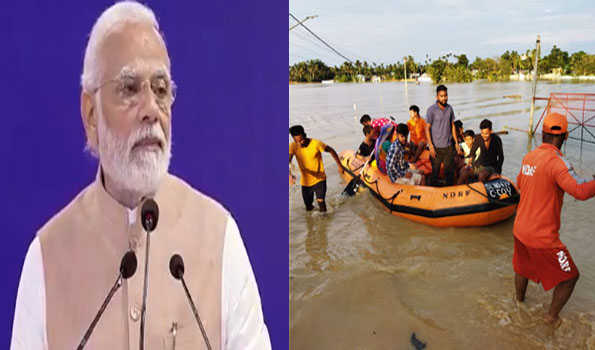 New Delhi, June 23 (UNI) Prime Minister Narendra Modi on Thursday said that the Central government is continuously monitoring the flood situation in Assam and is working closely with the State government to provid

e all possible assistance to overcome this challenge.
In a series of tweets, the PM said, “Over the last few days, parts of Assam have witnessed flooding due to heavy rainfall. The Central Government is continuously monitoring the situation in Assam and is working closely with the State Government to provide all possible assistance to overcome this challenge.”
Informing the Army and NDRF teams are

present in the flood affected areas, Modi said, “They are conducting evacuation operations and assisting those who are affected. The Air Force has conducted over 250 sorties as a part of the evacuation process.”
“CM Himanta Biswa Sarma, Ministers of the Assam government and officials are working round the clock in the districts and helping those who have suffered. I pray for the

safety and wellbeing of all those in affected areas and once again assure all possible support,” he wrote.
Several districts of the State are affected by floods caused due to incessant rainfall. (UNI)

Mithai: Clubbing together love story & family drama in the back off traditional sweets