EAM also meets his counterparts from other nations

Kigali/New Delhi: External Affairs Minister S Jaishankar on Thursday participated in a group photo-op at the CHOGM Foreign Ministers’ meet in the Rwandan capital, that also included Pakistan Minister of State for Foreign Affairs Hina Rabbani Khar. The EAM also held talks with several of its counterparts on the sidelines of the CHOGM meet.
Earlier, he addressed the CHOGM Foreign Ministers’ plenary on theme of Democracy, Peace & Governance. He stressed that India, the world’s largest democracy, offers numerous examples for the Commonwealth. “Our digital backbone is of particular relevance.
“Underscored the importance of collectively addressing the crucial challenges of our times, including post COVID recovery, climate change and ongoing global conflicts,” he said in tweets.
During his meetings, the EAM also held talks with Jamaican FM Kamina J Smith, candidate for Commonwealth Secretary-General 2022, whose candidature India is known to have backed.
He said in tweets: “It was a real pleasure to talk to FM @kaminajsmith of Jamaica.
Our close bilateral ties were only recently underlined by the visit of the President of India.
“Our cooperation extends to the multilateral arena including the Commonwealth.”
The EAM also held talks with his counterparts from South Africa, New Zealand, South Africa, of host country Rwanda, 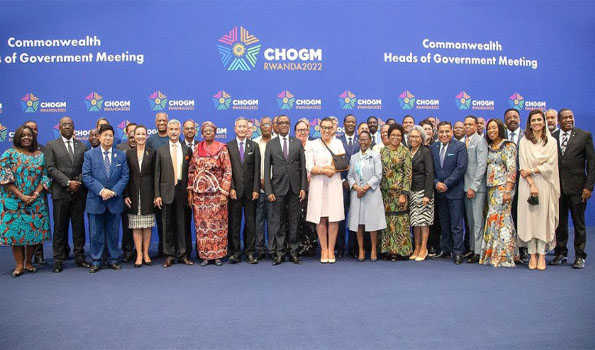 Cyprus, Sierra Leone, Sri Lanka, Bangladesh, Singapore, Brunei, among others.
He said in tweets: “Treat as always to spend time with FM Naledi Pandor of South Africa.
Discussed the international situation with her. Agreed that India and South Africa must together uphold the interest of the Global South.”

“Treat as always to spend time with FM Naledi Pandor of South Africa. Discussed the international situation with her. Agreed that India and South Africa must together uphold the interest of the Global South.”

“Exchanged perspectives on regional developments. Timely exchange of views on regional & global issues.”
He also held talks with the Sierra Leone FM DJ Francis.
“Heartwarming to hear from @Prof_DJFrancis of Sierra Leone the high regard for India’s peacekeeping contribution even now.
Our cooperation has grown steadily on these foundations, covering mineral prospecting, agriculture, education and health.
“A resident Indian Embassy in Freetown helps to take ties forward.”
The Sierra Leone FM, said: “On the margins of CHOGM Rwanda2022, I had a positive bilateral meeting with the Minister of External Affairs of India, H.E. Dr. Subrahmanyam Jaishankar. I used this opportunity to THANK the Govt & people of India for the peace in Sierra Leone by contributing UN peacekeepers.”
Rwanda’s Foreign Affairs Minister Vincent Biruta chaired the pre-CHOGM Commonwealth Foreign Affairs Ministers’ Meeting.

PM Modi at G7: Becoming pro-planet people, Investing in a…